When Adam August Krantz founded his ‚mineralshop' in 1833, Mineralogy, Geology and Paleontology had just come out of their heroic age and were beginning to establish themselves as individual sciences. J.A. BREITHAUPT had laid the foundation for the science of ore-deposits and geochemistry in 1847 with his paper on the ‚Paragenesis of Minerals'. In the field of crystallography, HESSEL developed the mathematical proof for the 32 crystal classes. In geology, LYELL created the theory of actualism and W. SMITH recognized the value of index-fossils.

With Adam August Krantz, born in 1808 in Neumarkt in Silesia, studied Pharmacy. His master was a mineral collector and might have kindled the flame of interest in his young apprentice, so in 1832 Adam August Krantz began to study "Geognosie" at the famous "Bergakademie Freiberg" in Saxony.

The ore-deposits in the near and far surroundings of Freiberg seem to have fascinated the young man much more than his former studies in Pharmacy. Apart from establishing a collection of his own, Adam August Krantz got to know all the scientists and collectors who came from all over Europe to visit the prosperous ore-deposits. This certainly led to quit a few exchange trades and finally to the idea of establishing the business.

Luckily, a former note book served as first business book. The inscription "Start of the mineral business of Krantz in Freiberg, on the 14th of Decbr. 1833" shows the beginning of the successful business.

Only four years later, in 1837, Krantz had already moved his business to Berlin. The Prussian capital was a center of science and thus provided the most favourable conditions for a swift development of the young enterprise. In addition the extensive travels of Adam August Krantz and his employees were responsible for the enormous rise of the firm in the first few years.

The personal contact with numerous important scientist and collectors guaranteed long-lasting connections. In the old correspondence we find letters from DUFRENOY, DUNKER, HAUER, HOERNES, JAMESON, MICHELIN, OPPEL, PARTSCH to name only a few. In order to find new contacts and material, Krantz sent his employees all over Europe and even to North America.

In 1850 A. Krantz moved to Bonn, probably because of the excellent reputation which the Bonn University and especially its Earth Sciences Department enjoyed all over the world.

On the bank of the Rhine he erected a large mansion, which at that time was still surrounded by vineyards. The house was situated opposite the most beautiful scenery of the Seven Hills. A visit to it and its magnificent collections was the highlight of many a traveller's stay at the Bonn University. Among the visitors were such famous scientists as HUMBOLDT, GEINITZ and BEYRICH.

When August Krantz died in 1872, his company was famous throughout the world. Gold medals gained at world-exhibitions and personal recommendations of renowned scientists honored the extremly conscientious and highly creative work of the founder, who had contributed considerably to the early propagation of the Earth Sciences. His private collection, bought in 1875 by G. VON RATH for the University of Bonn, formed the foundation of Bonn's Mineralogical Museum, which up to this day is one of the most prominent collections in Europe. The collections, teaching models and exhibition pieces sold to customers all over the world certainly promoted the scientific development of quite a few institutes and departments and had a positive influence on the continuously growing interest of people in Geo-Sciences.

For the next 16 years, the business was managed by August Krantz's son-in-law, Theodor Hoffmann. Being quite untrained in the Earth Sciences, he was dependent on the help of a man, who was to become on of the most qualified mineralogists of this time: C.Hintze. After having worked in the firm for 6 years, HINTZE became professor of Mineralogy in Breslau (Silesia). 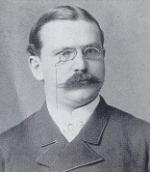 There, one of his students was Friedrich Krantz, a nephew of August Krantz. After his dissertation, he bought the firm from Th. Hoffmann.

With him once again a brilliant, inventive man took hold of the reigns. Combining business ability with scientific knowledge he considerably extended the business. Extremely detailed catalogues of special collections appeared in copious numbers.

Having studied Mineralogy, he was especially interested Crystallography. Supported by his teacher C. HINTZE and crystallographs from all over the world, he edited numerous collections of wooden crystal models, the largest of which contained not less than 928 pieces. Throughout the world hardly any Mineralogical Department exists which does not work with those teaching aids from Krantz.

Like his predecessor, he spent a great deal of his time travelling and sent his employees to interesting localities all over the world in order to collect material.

On the occasion of the firm's 60. Jubilee C. HINTZE wrote to his former student: "Six of my best years I worked for KRANTZ and therefore I am especially pleased, that it was granted to one of my first and most esteemed students, to bring the business to flourish as it had not done before. To him I cry a sincere vivat, florat, crescat yours truthfully C. HINTZE".

The beginning of World War I. had almost fatal consequences for the business.

The vitally important international connections were suddenly interrupted. Friedrich Krantz managed to save the business through the war. However, a few years afterwards in 1926 he died. His wife took over with the support of her nephew Fritz Krantz. The business, being mostly dependant on the interest of scientifical institutes and museums, was very much imbedded by the serious political and economic crisis of the Twenties and the Thirties. During World War II, a great deal of the precious collections were destroyed.

During the war, the continuation of the firm was secured only by the great personal sacrifices of Olga Krantz. In 1948 she died and her nephew was confronted with the most difficult period in the firm's history. Apart from everything else, the international connections had to be revived. Fritz Krantz now profited from his travels to America. Numerous personal relationships from that time now bore fruit:

Once again, WARDS bought the wooden crystal models; ESTWING chose Krantz as representative for their renowned range of geologic tools; museums bought new material, often by way of exchange; and the casts were incorporated into the catalogues of Japanese dealers. Most of all the need of the rising oil countries in the Near East and North Africa to catch up with western educational standards, had a major influence on the reestablishment of the firm's exports.

Meanwhile the formerly magnificent buildings in the Herwarthstr., that had been erected by Friedrich Krantz, could no longer provide the necessary conditions for a smooth working process. The work shops and stores were spread over three houses which showed definite signs of age. In 1969, Fritz Krantz moved his firm to a new building in the industrial area of Bonn. The removal lasted a whole year. Fritz Krantz died 5 years later. He was followed in the firm by his daughter Renate Krantz who had studied Geology in Tübingen near Stuttgart. She enlarged the international contacts and visited the geologists in Japan, China, Australia, America and other countries. At her time the geo-catalogue with lots of geological materials was introduced. After her death, in 1995, her sister continued to run the business and two of her children follows her. 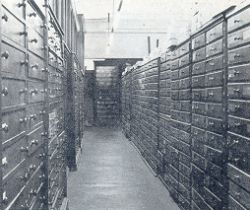 Already over 180 years have left their traces. Adapting to the occurences of the times new accents had to be set. Today Krantz is probably the oldest and at the same time one of the biggest geoscience dealers on the world market. The programme of teaching materials contains more than 1000 articles, the smallest collection containing 10, the largest 5000 specimens. A team of 13 people master the great variety of tasks, that are adressed to the firm by customers in Mineralogy, Crytallography, Petrology, Geology, Paleontology and Anthropology. Tradition ranges as high as modern innovations allow. For 140 years the same family has manufactured the famous wooden crystal models. The stores of minerals, fossils and rocks still bear some of the legendary collections of August and Friedrich Krantz on an area of 1700 m².

The foreign trade, which was revived by Fritz Krantz, is one focus of Krantz's activities. The exports to the Near ad Middle East, North Afrika and the rising countries of the Third World are especially important.

Apart from the customers from Overseas, the departments, museums and schools, collectors are among the many customers of Krantz.

The large stocks of minerals, fossils and rocks provide them with manifold opportunities to build up and complete their collection, while Krantz's offer of tools and equipment support their own collecting-activities in every possible way.